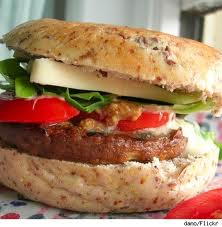 Posted by Maile.
At a local restaurant a man at the neighboring table kept looking from his hamburger to Lori’s veggie burger, and finally asked, “What are you eating? It looks better than my burger!”Lori often orders veggie food when she dines out. She says their vegetarian fare is a good test of a restaurant. Is it my imagination, or are veggie burgers becoming mainstream? Have they become one measure of a chef’s skill and creativity?Not long ago, a reporter for a local publication called Lori to ask about making veggie burgers at home. As I listened to their conversation it occurred to me that veggie burgers would make a good family meal. They’d make a great entree for sandwich and/or vegetarian night. (You know: every week you have a pasta night, a soup night, a pizza night, a veggie night, a breakfast-for-dinner night.) Veggie burgers would also make a good platform for a sauce person like my daughter-in-law: salsa, guacamole, onion-mushroom gravy, pesto, aioli, and even more creative options. Veggie burger rolls would be a good challenge for a baker (daughter-in-law, again).But I’d want to put them together rather than buy them, so I’d know what was in them. Hmmm, what kind would the family like? There are tons of recipes for veggie burgers:Nut burgers.Falafel burgers.Red lentil burgers.Black bean burgers.Hominy pinto burgers.Lemon basil tofu burgers.Lemon, olive, lentil burgers.Lentil, olive, mushroom burgers.Basically, you need something for heft – rice, beans, oatmeal, soy product; something to hold it together – an egg, breadcrumbs, cereal; something to give it contrast – carrots, squash, mushrooms, peppers, onions; and some good seasonings – the sky’s the limit.What if I made a different kind of veggie burger every week or so to see which the family liked best? Then I could put the favorites into our family meal rotation.I’d have the kids join in a mass veggie burger making session (because they’re too much trouble to make fresh each time) and freeze them. Suddenly, it’s a plan.Here’s one of Culinary Underground’s recipes for:

1 Tablespoon olive oil1/4 Cup grated carrot1/4 Cup grated onion1 Tablespoon soy sauce or A-1 sauceSalt and pepper to taste1 Cup black beans, drained, or edamame, thawed1/4 Cup cooked millet or old-fashioned oats1/4 Cup wholewheat breadcrumbs1 large eggSauté onion and carrot in olive oil until tender. Add soy sauce, salt, and pepper. In a large bowl, mash the beans well with a potato masher (or pulse in food processor) Add the carrot-onion mixture, the millet/oatmeal, and breadcrumbs and combine. Beat the egg and add, mixing just until incorporated. Form into four patties (you may add more breadcrumbs to make a workable mixture that holds together). Freeze on a cookie sheet for about 15 minutes before brushing lightly with oil and grilling over direct heat for 15 minutes, turning once. Alternatively, broil until brown and crispy, turning once.Another way to make sure the patties hold together is to bake the burgers in a 350 degrees F oven for about 20 minutes before grilling.