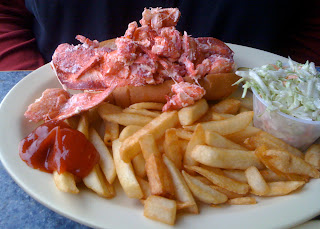 Posted by Maile
Recently, a friend and I were on our way to a workshop in Nova Scotia. Just before lunch, outside Bangor, we stopped for gas. We asked the attendant (yes, it was a full-service gas station of all things!) where we could get a cup of coffee and a bite to eat. He thought for a minute then said, “Oh, the Eagle’s Nest. It’s right down the road on the left.” He assured us that the locals went there.

We almost missed it. The place looked like a derelict house with a sign out front. Inside, it actually did look like somebody’s house with some tables and stools crammed in. It was early, so we lucked into a table in front of the picture window overlooking the Penobscot River.

The river view was soothing. Inside, it was good people-watching. You know how sometimes when you go to a local place you feel uncomfortable? People stare at you, or you want to stare at them and don’t dare? No problem. The Eagles Nest was friendly and laid back.

We weren’t sure we wanted a whole lunch, but the menu made the decision for us. Now, you have to realize that some of our friends have elevated the lobster roll to an icon. When they heard we were heading north they said, “You have to get a lobster roll!”

Personally, I think lobster rolls are overrated – all that mayo, and white bread. And expensive! I’ve heard people say they’ve paid more than $20. Still, lobster roll was on the Eagles Nest menu, and only  $13. So I ordered it.

Truly, it was embarrassing. A HUGE mound of lobster claw meat, lightly dressed with – I don’t even think it was mayo. It was a struggle to find the roll under all the lobster. Fries, of course, and absolutely delicious cole slaw – again without a mayo dressing. Because I’m a slaw fan, I was nearly as excited about that as about the lobster.

OK. I’m a convert now, as least as far as Eagle’s Nest lobster rolls are concerned. There are other ways to get to Nova Scotia, but taking route 9 out of Bangor takes you by the Eagle’s Nest.

One thought on “The Eagles Nest, Brewer, Maine”